Bell Canada has admitted to problems tracking Internet use for some customers.

This is embarrassing, given the company’s insistence on usage-based billing for its own clients and for other clients of other Internet service providers that rent its network.

Bell posted a message at its website yesterday, where clients log on to track their Internet usage.

“Please note that we have identified an issue that may cause Internet usage shown on the site to be overstated in some cases,” it said.

“In order to ensure we provide reliable information to all our clients, the usage tracker will be unavailable while we resolve the issue. We apologize for the inconvenience.”

I’ve heard from three Bell customers who said their Internet usage shown by the website’s tracker exceeded their actual usage.

Allan Taylor said he never went over 2.5 gigabytes a month, since he didn’t download movies, but was charged for exceeding his 25 GB limit.

Jerry Shulak said Bell’s Internet tracker showed him using 2.7 GB of data on Feb. 2, a day when he used 150 MB (megabytes) at most.

On Feb. 5, he drove the United States for a day and unplugged his phone line from the computer modem.

Michael Stortini’s Internet usage never went over 0.72 GB a month, he said. Yet he was charged over $20 in fees last December for usage of 10.38 GB, despite no change in his Internet habits.

Bell showed his Internet use at 25.76 GB over the Christmas holiday period. Yet he was away from home for 12 days.

Only a small minority of customers was affected by the tracking errors, said Jason Laszlo, a Bell spokesman.

“It’s never good to impact even one, but let’s keep scale in mind – it’s less than 0.1 per cent of our Internet subscriber base affected and we’re making good to all of them. But yes, the timing is awful,” he added. 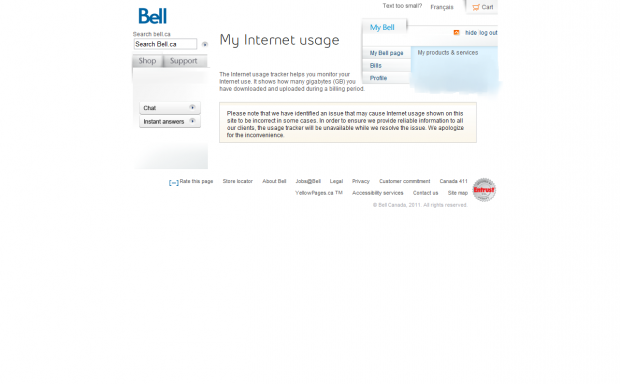